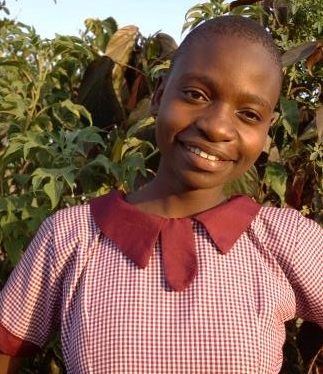 Sharon is 14 and joined Achungo last year in 7th grade.  Before that she was been living with her step-sister and brother.  Her step-sister’s husband is deceased and her step-sister supports herself selling sugar cane and firewood at the roadside.

For a time, Sharon attended nearby Rodi Primary public school.  She likes Achungo because “there is higher teaching here.  Here the teachers like us.  At the other school if you made a mistake you were caned (spanked with a switch).  Here, they just correct you.  And here, they provide sanitary towels for the girls.  At other schools they just stay home during their monthly cycle.”  (Girls miss a lot of school because of that)

Sharon’s favorite subject is science – especially studying animals.  As to her career aspirations, she says “I would like to be a Lawyer.  I would learn to judge people fairly and I won’t accept a bribe.  I also want to be a journalist.  I want to be the one reporting.  I would go to a certain county where they are lacking food and I would make a report asking the government to help them.  After University, I would like to come to America as a journalist”

Her favorite sport is netball (it’s like basketball without the dribbling) and she likes to read.