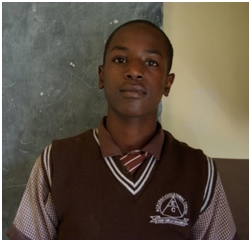 Ian is very bright and always willing to speak up in class and provide the careful analysis to support positions he takes on any given topic.

He came to Achungo in 2013, having grown up in Ojunge village with his mother and 4 brothers.  His father divorced her several years ago and his mother could no longer pay Ian’s school fees.  He had to leave Ojunge Primary and stay home to help in the garden and to sell bananas in the marketplace.  He says their thatched roof would leak with every rain and they only had food for one meal per day.

Ian heard about Achungo from a friend and came to visit.  He was impressed with the buildings but the Director was busy that day, so this persistent young man came back a few days later to ask about being admitted.  Director Michael looked into Ian’s situation and then admitted him to Achungo, much to his delight.

He likes reading and playing soccer and volleyball with his classmates.  On weekends he attends the local Seventh Day Adventist church.

His goal is to become an electrical engineer, and he wants to outfit their home with electricity.