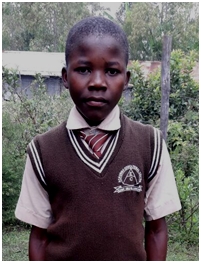 Evance (14) came to Achungo this January (2017) from his home near Homa Bay (8 miles away) where he lived with his mother and aunt and two brothers and two sisters.   His father passed away some years ago in a road accident and his mother is unable to work.  They now share a hut with his aunt.   The family struggles even to have enough to eat.  Evance told us, “often we have only porridge to eat and then we sleep, just waiting for the following day.”

They could no longer afford school fees for his primary school, the Christine Academy.   Evance says that at Christine they were “short of teachers and the teaching standard was poor.  But Achungo has good teachers and this has resulted in good performance.”  His favorite subjects are Math and Science and he likes the teachers and the dorms and the whole environment of the school.  “They are much better than where I was before where I could only drink water and sleep.”

After classes he likes drawing pictures and playing soccer with his friends.  He likes boarding on-campus with the rest of the eighth grade because “boarding gives me time to study, especially at night.”

“ I am working hard to become a surgeon so I can save our family and my siblings.”