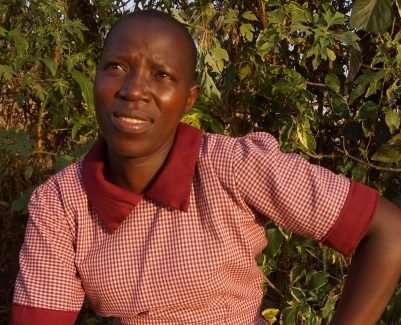 Esther (15) came to Achungo mid-year last year, having spent some time at Hogomi Academy in Ndhiwa (about 12 miles away).  Her mother and father live in Obiero where she has 2 brothers and 2 sisters.  They did not have money to support her, so she moved in with her oldest sister (20) and husband and their 2 small children.  Her sister heard about Achungo from a neighbor.   Esther had dropped out of school and had been lured into a premature marriage.  We brought her to Achungo when her case was reported to us by the area chief.

Her favorite subjects are English, and CRE (Christian Religious Education – a Kenyan government curriculum), especially the story of Jesus.   “At Achungo we are being taught well.”  She wants to become a TV journalist (some TV reporters recently visited the school, in case you noticed a pattern in these responses). “If a disease comes, I can go to other countries and then tell our government what they can do.”   She likes netball and going to church and discussing important topics, but more than anything enjoys singing with Grace and Lorine.