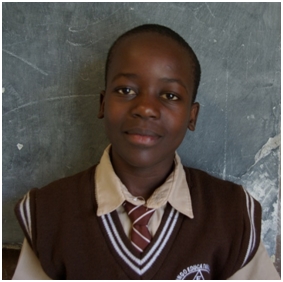 Ashlene is a hardworking 13-year-old who came to Achungo in 2016 as a seventh grader. She was living with her parents in their mud hut and was helping them with field work to get enough money  to survive. Sometimes they didn’t even have money for lunch, let alone for her school fees. This forced her to leave the primary school she had been attending.

She says, “I like Achungo because it is a hardworking school.” Her earlier primary didn’t have enough teachers and the quality of teaching was poor, but she appreciates the level of teaching and support she gets from her teachers at Achungo.

After classes and during school holidays, Ashlene likes to play soccer. She wants to become a pilot and “fly to different countries.” And she is willing to work hard to accomplish that dream.