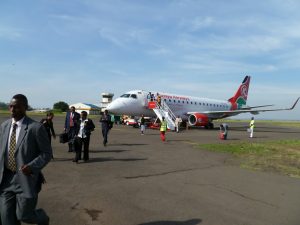 Although I actually just got back from my 20-day trip to Achungo as of this writing, I couldn’t blog while there. I had virtually no internet access. There’s no wifi — a few times I borrowed someone’s laptop with their 3G internet service (Safaricom!) So I now recreate those 20 days, Day 1 being Oct. 29.

Michael Nyangi is the founder and Director of Achungo. He meets me at the Kisumu airport with Beatrice, his wife, and with George, a Marketing consultant who is on his Kenyan board. His Kenyan board consists of a group of local supporters formed in 2008 of friends, his past teachers and others and who meet when issues arise or at least monthly. When officials recently told him the school would have to close unless he had more classroom space and desks, it was his board who found him 50 used metal sheets as a start for materials for the new building. They have helped him and encouraged him in a ton of ways.

Hoping to organize group trips next year, I want to check out prices on school supplies, etc. in the big city of Kisumu (biggest we’ll see this trip). We stop at the “mega-mart” (one of the few shopping centers here) and I buy lots of water as I check out what else they have. The Nakumatt a.k.a. MegaCity is a warehouse-sized, modern shopping mall that includes a Walmart-type store—very clean, well-lit, well-stocked and virtually empty of people at 9:30 a.m. though what I saw of the small parking lot seemed fairly full.

Next, after dropping George off, we drive through lush green countryside studded with small plots of bananas and maize, even some rice, as the road turns from tarmac to serious potholes to dirt, and we slow down accordingly, before we make it to Rodi Kopany and arrive at Achungo Children’s Center.

The rest of the day I spend at the school getting acquainted with the teachers and the students. 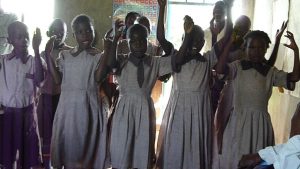 First I’m introduced to the teachers in the Teachers’ Lounge (that’s what I call the 8×15 room that serves as their office. Michael kicks things off in this somewhat formal meeting and speaks of how important Achungo is and that sometimes we have to be patient and wait on God’s timing when we’re in His hands—I think less a reference to my joining Achungo than to his personal pain that he cannot pay the teachers (one has just left when he found an opportunity to be paid). Next up, introductions by headmaster Paul (a retired teacher) and a short speech by me (my journey and how my experiences indicate to me how important Achungo is and that it is my privilege to be able to work with them). I tell them that much of what I will do during my 3 weeks will be to learn from them how I could best serve them as Executive Director. I also recounted Kim Golter’s advice on running a non-profit: essentially, put God first and He will make sure everything else happens. Michael closes with words acknowledging me and my comments.

After introductions and sharing with the teachers, the children gather and sing welcome songs (“everybody come, we gonna welcome, our visitor at Achungo…”) and recite some homegrown poems. 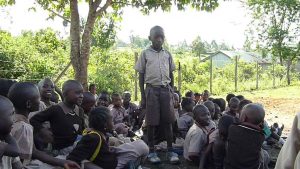 Then in a classic African scene , everyone gathers under the shade tree. First Michael quizzes the children on random questions and then Richard invites them to tell stories and several stand in turn and tell seemingly ad hoc short stories. Each begins with an interactive preface — something like “story, story” and all the children respond in unison “tell us a story”.

After the ceremonial lowering of the Kenyan flag, the school day is over and the children file out the gate for their walks home. I join a group of them and talk a bit with Madame Nancy (Akoko—the younger) as we walk past another small private school (Midland Vision Academy) and some rental units (some with 10×10 single rooms in long tin buildings, others upscale brick with TV antennas. As we get into town, I leave the children and Nancy to their various homeward paths and head to the open market – it’s Friday, Market Day! Rodi is not much more than a few blocks of shops clustered around a junction, but it really comes to life on Friday.

Picture a supermarket after a tornado has thrown away the roof and walls and cast all the goods all over the ground! The vendors mostly have their wares on tarps (old sack material, etc.) laid out on the ground with virtually no organization and little room left to walk. OK, there are some discernable “departments” — a group of proximate vendors selling used shoes and some selling used clothing of all sorts, the group of charcoal sellers, of fishmongers, sellers of hammered tin pans, of maize, of greens, and of other produce vendors.

Lots of friendly banter, some aimed at me: some “karibu’s” (“welcome/come in”) and “Hello’s” along with the various communications of “wouldn’t you like some…” During the hour I stroll, taking notes and pictures, a few men pester me for money and I turn to them and say “I don’t speak Swahili” (in Swahili) and leave them to ponder that as I make my exit.

I walk back to the Tausi Hotel (Motel 6 caliber but the nicest by far in town and very adequate), order the “fish stew and ugali” – a whole Tilapia that seems like it’d been fried a while and then cooked in a mild tomato sauce, on separate plate the big lump of maize ugali (polenta-style) and in a separate bowl the sauce from the fish. Tasty and filling, at least after I get all the bones out of the way. ($3 for the food and $.40 for a small soda (240 Kenya shillings / 30 Ksh). Guess I won’t go broke this trip! I hear the jetlag calling and once they bring me the wash basin to clean up after my sup, it’s time to catch some z’s.